Okay.  So our first Work of Art Challenge has come to a close.  Big thanks to all the participants.  Granted there were only four of us, but we are the pioneers, so that makes us awesome. I actually learned a lot about myself through this project.  For one, I learned that if I’m not inspired having a project to do can really suck the life right out of you. I loved receiving the entries and getting my husband and cousin to sit down for an art day.  I also LOVE the idea that I will be sending Alien Army out to new friends.  As far as my participation in the challenge,  I really struggled in the beginning.  I kept going back and forth on whether to go with something political or personal and I ended up feeling really anxious with the whole thing.  Eventually I just kind of surrendered and the project became fun again.

I am thinking for the next challenge it might be something more to the effect of “who wants to make something in exchange for alien army?!”  More like artist trading cards. We’ll see.  Regardless, I am honored that Mary, one of very favorite art bloggers  and her friend Tina joined the challenge.  And a BIG thank you to Ev, who always stands by me and is  open to new things.

Here are the projects! 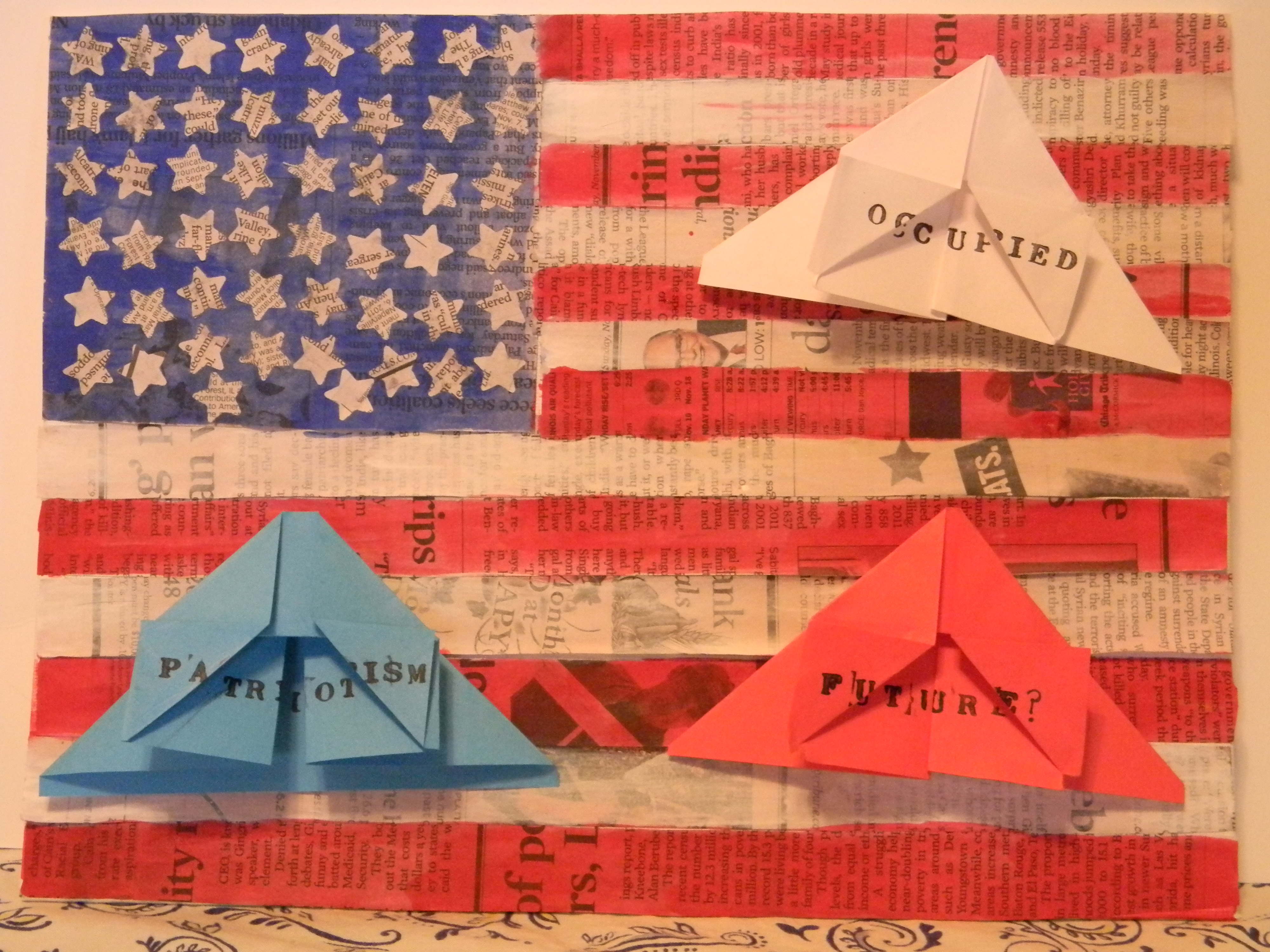 Tina wrote the following about her piece:

My headline was from the November 16 edition of the New York Times online: “After Giving Up Job for Occupy Protest, Questions for Future”.  It was about a man named Tim Weldon, who holds a master’s degree, quitting his job helping people with disabilities find jobs to work on a think tank for the Occupy Wall Street protest full-time.  The article follows him on his last day of work where he is helping a man with Down’s Syndrome find work at a pizza place.  The man brings a CD of children singing patriotic songs to play in Tim’s car while they drive around town getting him ready for his first day of work.  Tim says he has never considered himself patriotic before but is moved to tears by the CD because, for him,  his involvement in the protest has taught him what patriotism is all about.

The article and video moved me to create this little piece.  I used newspaper, acrylics and ink.  The tents are, of course, removable. 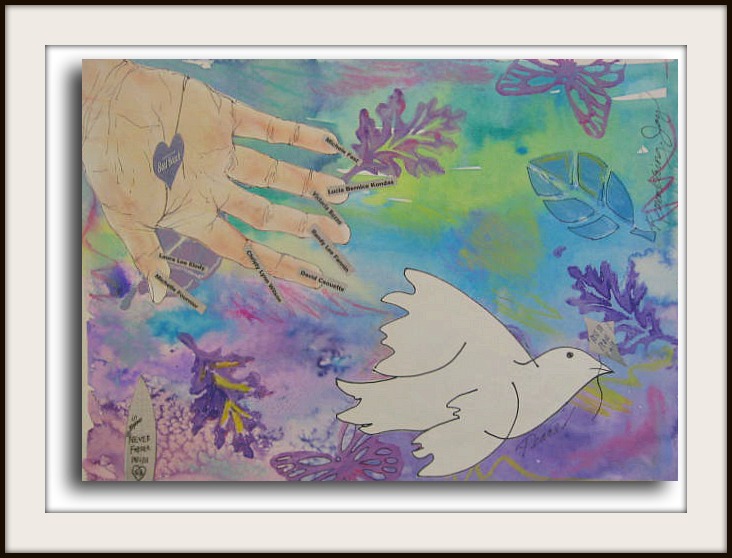 I debated about what type of headline to focus my piece around: political satire, nature based,ect. Ultimately I decided to create a piece centered around our local paper, Sun’s headline, “Remembering the Victims and Their Lives.” Just to give you a background: On Wednesday October 12th, a man in a dispute with his ex-wife about the custody of their son,  walked into the hair salon where she worked and shot and killed her and 6 others (injuring another) and killed another man sitting in his car outside. Seal Beach has been described as “Mayberry By the Sea”. So as you can imagine, this tragedy has been devastating for this tight knit community.

My mixed media piece (watercolor, acrylic, chalk pastel and newspaper) is meant to honor the 8 lives lost as well as to remind us all to be kind to each other and to treasure the lives we have. 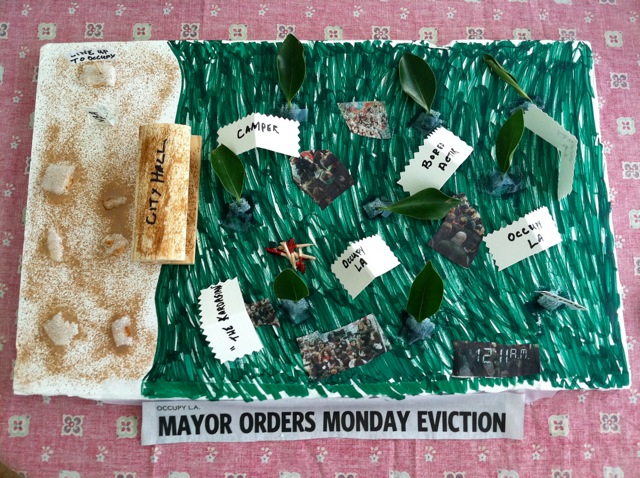 “I saw this article in the paper about Occupy Wall Street and it inspired me to make this project.  I enjoyed making it.” 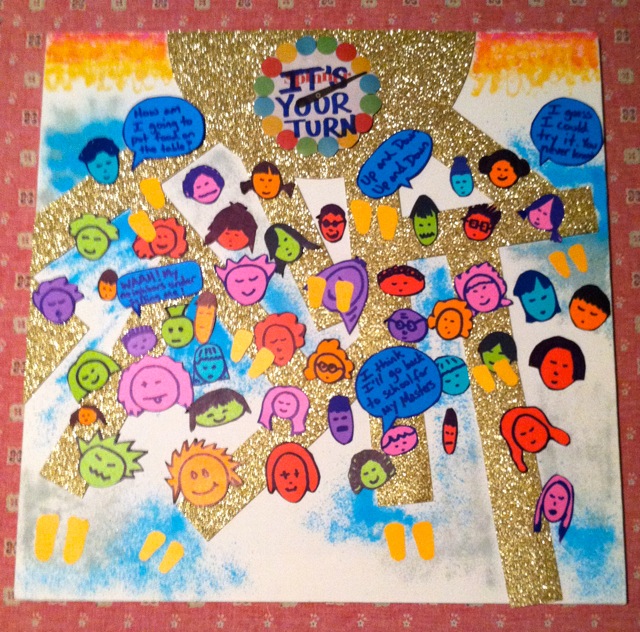 My headline was “When Did the Rules Change?” from an article in The New York Times Magazine.  It’s about the road to success and how it used to be that if you worked hard and followed the rules you were almost guaranteed a successful life.  Now, it is much more challenging to achieve success even if you have a college degree.  There are so many other factors; outsourcing to India and China, technology, etc.  Today, we need specific sought after skills and the ability to go with the ups and downs of life.  I recently had an experience with a graphic designer friend who criticized my decision to use CrowdSpring.com for a logo.  Crowdspring, which I HIGHLY recommend, is a place to post graphic design projects for a fee of your choice, and artists from all over the world submit proposals.  The winning designer receives the money.  Anyway, my friend felt really strongly that it wasn’t fair to the design industry to support this kind of ideology. I thought about it a lot.  When I saw this article I thought it was a good fit.  I would love to hear anyone’s thoughts on this.  I think it’s a fascinating conversation.  My project is meant to show the game of life and all the different ways people choose to travel the road to success.