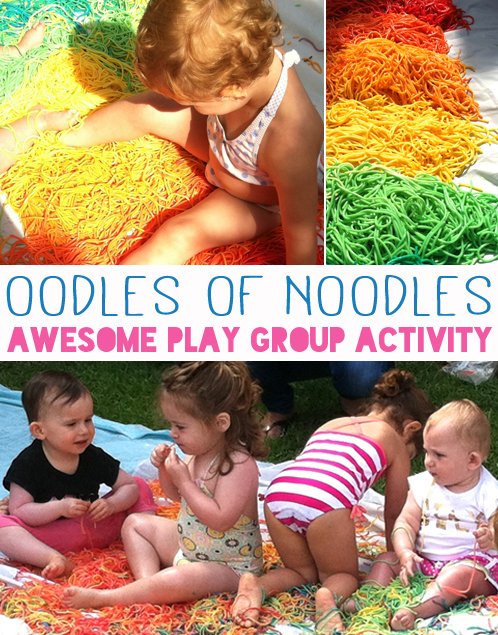 I have done a lot of fun activities with kids over the years but this might have been my absolute fav.  Oh my goodness.  This was so much fun!  I talked about the first half of our play group here.  This was part two, which happened after we snacked a little bit.  I had all the kids and parents stand to one side and I slowly poured different color spaghetti in rainbow on a big tarp.  This may have been my favorite moment, watching everyones faces, kids and adults, as I poured out the spaghetti.  I wish I had it on video.  Gigi was practically jumping out of her skin to get in there.  Everyone else was just staring totally mesmerized.  Priceless moment.  I had made ten boxes of spaghetti and dyed a large ziploc bag worth for each color.  It was time consuming but pretty easy.  Just put spaghetti in a ziploc, add water and food coloring, seal and swoosh around.  Then drain the water.  *Note* Add oil to the spaghetti so it doesn’t stick.  The colors are really vibrant and of course, the more food coloring you use, the brighter it gets. 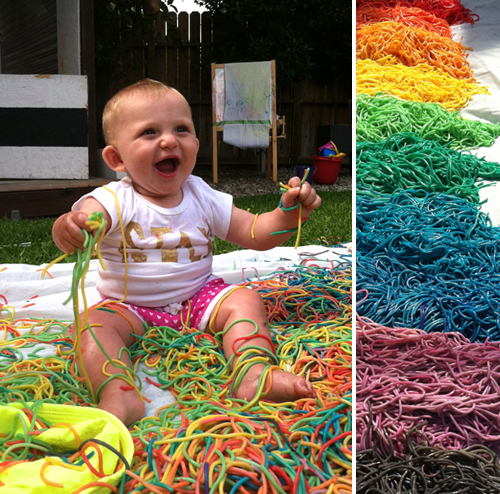 Little d had a blast.  She literally ate spaghetti for 45 minutes.  That girl cracks me up.  The older kids mooshed it around, walked in it, used the spaghetti as a slip and slide and poured it into buckets.  Every child had their own amazing experience with the spaghetti.  It was so great to see the ones who were hesitant at first make their way over and get involved.  Not to mention it looked absolutely beautiful.

The clean up wasn’t nearly as bad as I thought either.  We gathered all the spaghetti in the tarp and poured it into a box.  And then these two had a field day in their very own spaghetti boat.  So much fun.  Any spaghetti that was left on the grass just dried up in the sun and sort of became compost.  Either that or our dog Billie ate it. 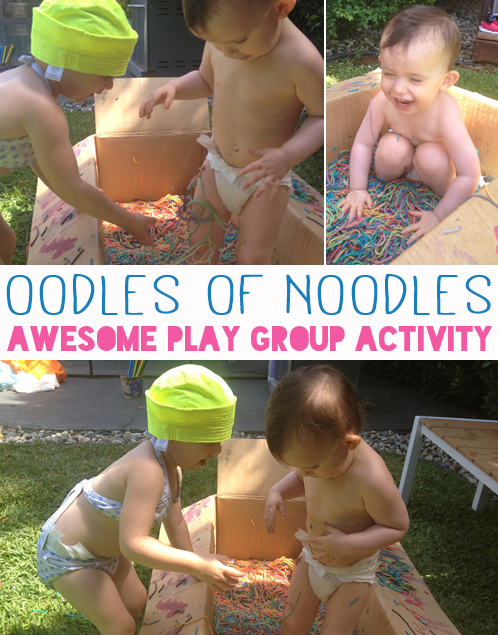 I can’t recommend this activity enough.  You don’t have to go crazy with ten boxes.   Maybe try one box and set it out in a bowl or a large tub.  Or you can put it in the bath with the drain in.  If you’re into no mess at all, you can put it in a plastic ziploc sealed with duct tape and let your child mush it around, like this. Whatever you decide, have fun!