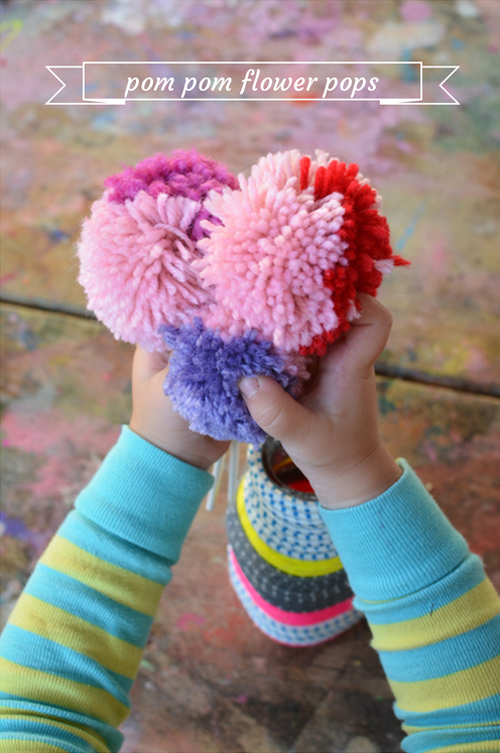 A few weeks ago I taught an art camp to 9 year olds and up.  It was one of the most gratifying experiences I’ve ever had.  I absolutely adored working with such an amazing group of young but old girls, while they created, challenged themselves, laughed, made decisions about their work and just had a great time.  We designed our own vans and made these awesome paracord vases, among many other things.  The final touch to the paracord vases were these pom pom flower pops that were so easy to make.  When I brought mine home, my girls went bonkers over them.  They just wanted to smell the pom pom flowers, play with them and move them all around the house.  It was pretty great.  This project is great for adults and kids.  Here’s how we made them.

*This post contains affiliate links.  Thank you for your support!

.  Pom pom makers aren’t essential for pom pom making, but they sure make things easy, so I recommend using them.  If you don’t want to use a pom pom maker, you can use paper, your fingers or a fork.  Whatever your method, get some pretty yarn

and plan out your pom pom.  Do you want to make it solid?  Two tone?  Multicolored? Large? Small? Medium? If you want more than one color, you’re going to wrap several colors around the pom pom maker or your fingers, etc.  I like doing mostly one color with a splash of another color.  If you use a pom pom maker, they all come with directions.  It will take a few times to feel confident, but once you do, you’re going to be in pom pom heaven. 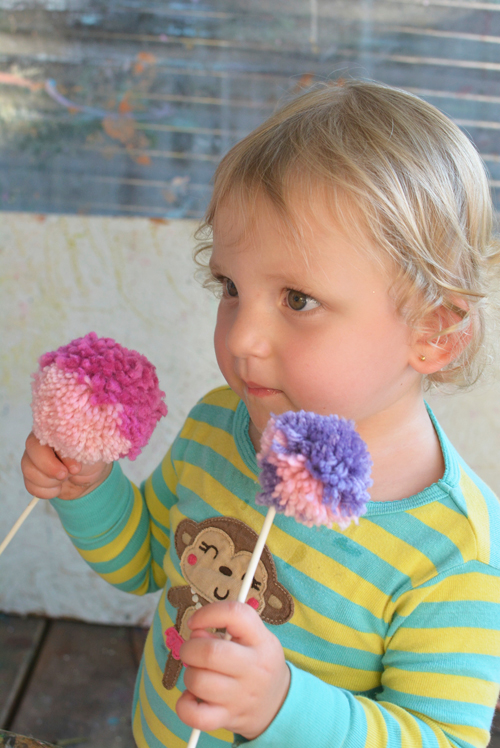 Once you have your pom poms made, take a glue gun

here.  I think you can get them at Michaels, the Dollar store at times, and even Target has them.  Pop cake making is pretty popular so they may even have them at your local super market.   Just put a nice little blob inside the center of the pom pom, stick the lollipop stick in there and squeeze it so all the yarn adheres to the glue in that spot.  It’s that’s simple.  I must warn you, if you let your toddlers play with these, they will likely look a little wilted after a while.  I happen to know from experience.  Ahem.  But if you just let them chill in a vase, they will stay nice and fluffy for a long time to come. 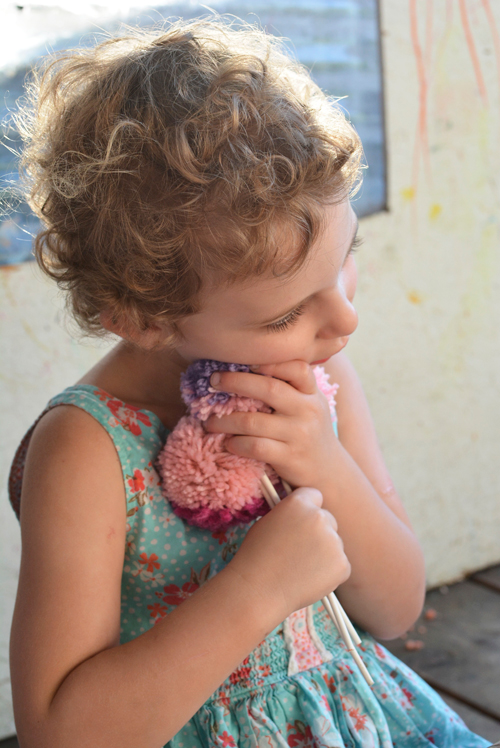 My girls hugged them, smelled them and squeezed them for about an hour. 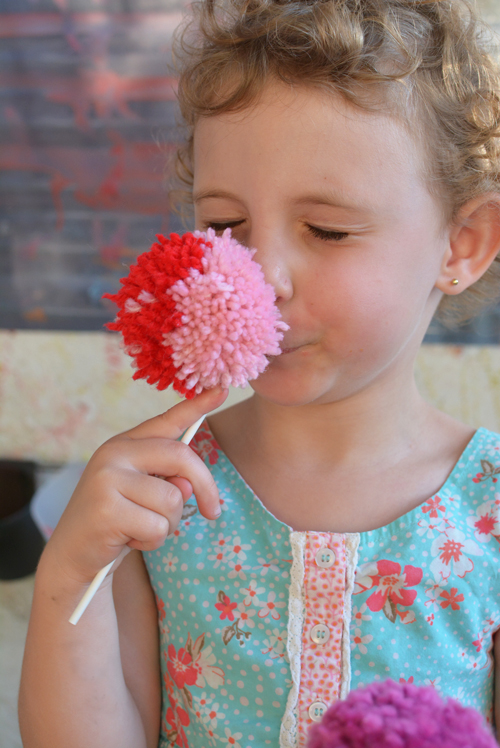 Here’s one of the superstars from art camp making her pom pom pops.  She rocked it! 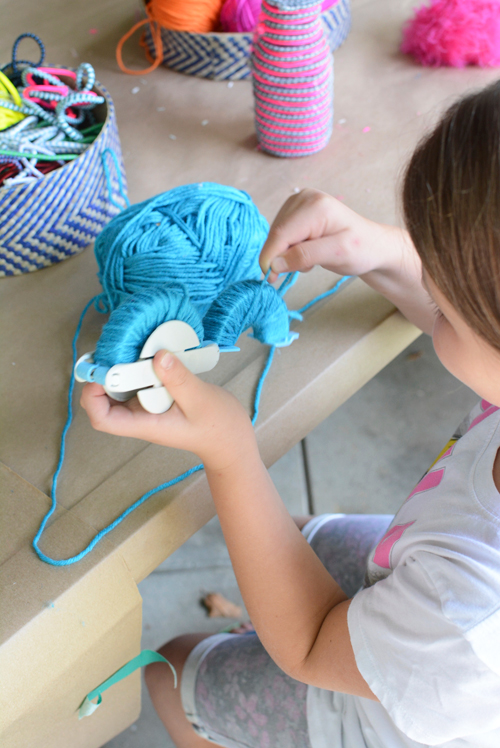 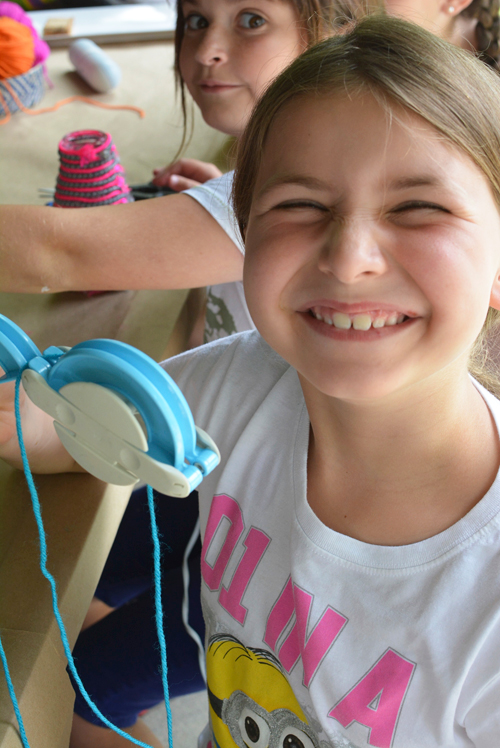 I don’t know what it is about pom poms that make everyone feel really happy, but they do, so be prepared to smile a lot while making these.  Have fun! 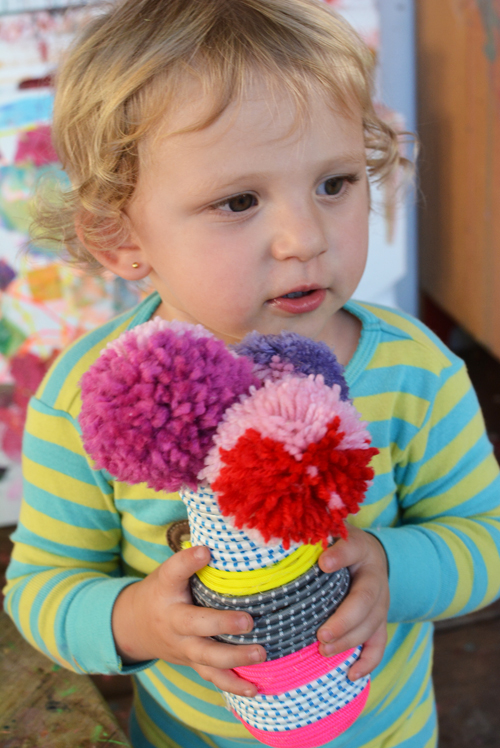