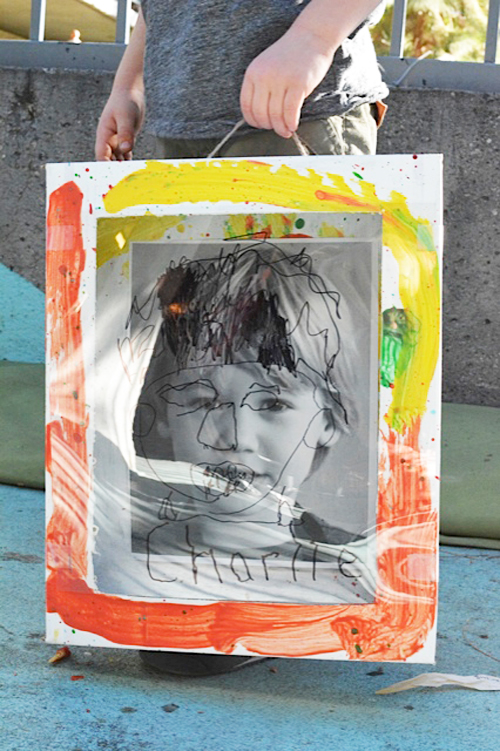 There are so many things I love about this project I’m not sure where to begin.  I just love it! I really wanted to do a self-portrait for my art enrichment class called Art Adventures.  When I researched ideas, so much of what I saw didn’t quite capture the essence of the child or it was too difficult for three and four year olds.  I was so inspired by a recent Reggio workshop I took, that more than anything, my goal was for the self-portrait to feel authentic to the child.  I am really proud to say I think we achieved that with these self portrait shadow boxes.  This is an amazing project done over two 45 minute sessions and it is so worthwhile.

First, each child mixed and named their own paint from the primary colors and different variations of white.  This part was so much fun.  Many of the kids added their own names to their paints or referenced their favorite shows, places or toys in the titles.  I had complete attention from every student as they waited patiently to choose their colors, mix them, and then finally name them. 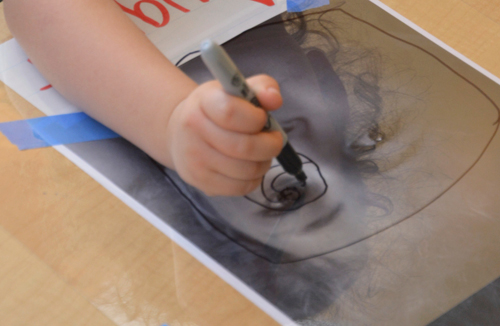 After mixing the paints, we talked about self portraits and I demonstrated on my own photograph how I could find different shapes in my face that are unique to me.  Each child was then invited to find the shapes in their own picture that was already taped to different tables throughout the room with a piece of 12×12 acetate over it.  I also taped their names under the acetate so they could trace the letters if they wanted to.  Each child was given a sharpie and off they went.  It was so interesting to watch how different kids approached this task.  Some worked diligently to find every shape in their picture, while others scribbled back and forth over their face. 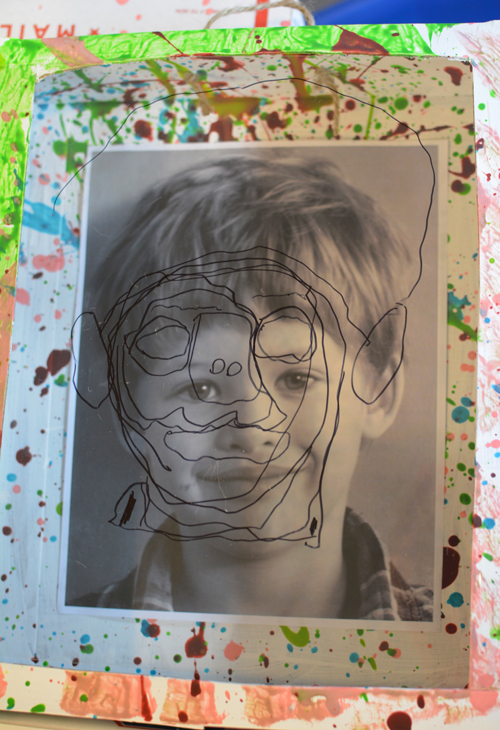 When the kids returned for week two I explained that we were going to travel on many adventures over the year, and we needed to create a passport to help us get to all the places we wish to visit.  We discussed the art style of Jackson Pollock and looked at photographs of his work.  I had all of their boxes set up on a big tarp outside ready to be splatter painted.  I had received a bunch of packages not too long ago that came in these great white priority mail boxes, but you can use any cardboard box.  I had pre cut a 9×11 rectangle in each with an exacto knife to create the shadow box. I invited the students to splatter away, which everyone did with gusto.  They all started with splatter paint only, and then over time different kids chose to paint their boxes directly with the brush.  We used the paint they created the week prior, which added a fantastic layer of interest to the project.  Some kids only wanted to use the paint they created, while other kids were happy to go back and forth sharing the shades they really liked. 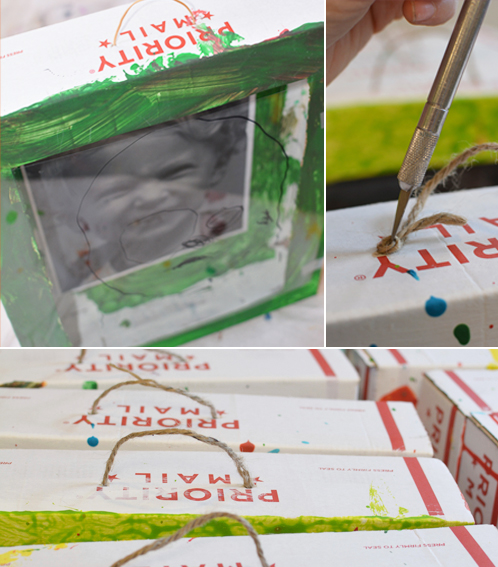 When everything was dry, I taped the photograph of each child in their box.  I printed the photos in black and white which made a nice contrast to the colors of the paint.  With an exacto knife I cut little x’s on the top of the box and then weaved a short piece of rope through the x’s and tied a knot on each end.  This created a little handle so the kids could hold their boxes with ease.  I tried using a rubber band, but it was too skinny and a bunch broke.  Finally, a little too late, I realized you could easily do this with a pipe cleaner which would have been way easier.  Oh well.  The rope looks really nice.  Lastly, I taped the acetate over the whole in the box and the shadow box was complete.  I hung each one in the hallway at school with pushpins.  Seeing them all together looks beautifully dramatic.  I think this may be my favorite art project of all time.  I can’t wait to make it with my daughters when they are a bit older.  If you try it, please shoot me an email.  I’d love to hear how it went for you.  The response from the families at school has been really special. 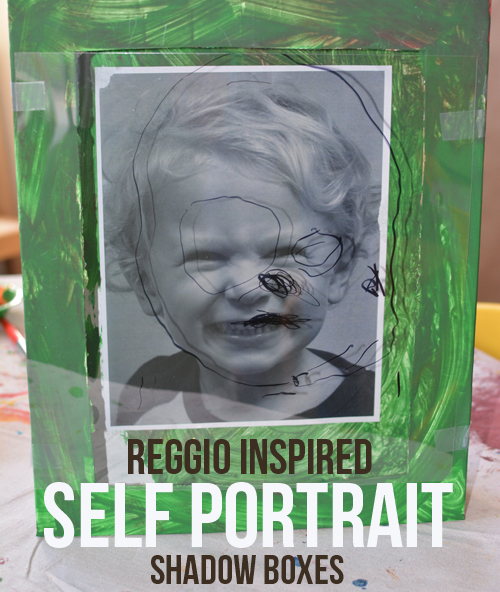